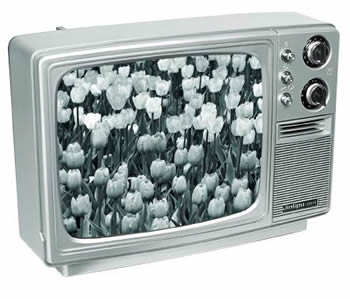 This year, some trees blossomed, but the rains beat the beauty out of them. Largely this was the fate of the Bradford Pears. Now, it’s just time for the Redbuds and then the Dogwoods to flower. I hope the rains will stop before they do it again.

It’s so pleasant to be able to ride throughout the countryside enjoying these colors. Along with those mentioned, the tiny leaves—some of which are also colorful—are now showing themselves. On the whole, it looks like it will be a delightful spring.

Think what it would be like live in a black-and-white world! Hard to imagine—except for now and then seeing an old TV show filmed before color TV. What a contrast!

The Scriptures are not flat, didactic, academic writing. The authors (and, of course, the Holy Spirit behind them) write colorfully. Hebrew is largely a picture language, the Old and New Testament alike are filled with vivid images. The man who preaches black-and-white sermons misuses the Bible. The days of the scholastics (with their Latin quotations, and Classical references) thankfully are over! But we must not replace them with dull, colorless language and examples that belie the truth as presented by the biblical writers.

Like rain that tears the blossoms from the trees, such preachers rip the Bible to shreds-leaving but the husk of it (to change the figure). When have you heard of God as a Rock, a Shield, a Fortress? Or, preacher, do you merely, blandly, speak about God’s “protection?”

If you are having trouble with this, why not attempt to preach from Revelation 21, 22? You find it extremely difficult to darken or smudge the scenes of that glorious land!